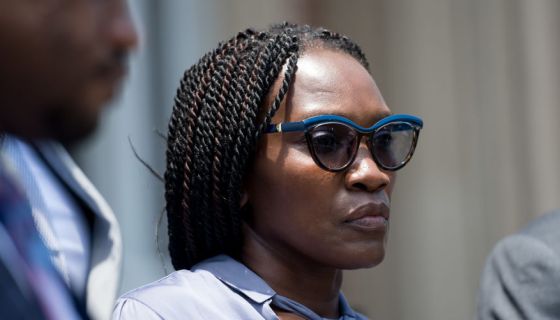 Ahmaud Arbery’s Mom Speaks Out About People Exploiting Her Son’s Death: “I Am So Disappointed”

As if the loss of her son wasn’t tragic enough, Ahmaud Arbery’s mother is now speaking out against the use of his name for personal profit. In a letter Wanda Cooper-Jones posted to Facebook, she began by thanking everyone for all the love and support extended by the nation during these devastating times.

“First, I would like to thank everyone for the support in the fight for justice for my son, Ahmaud Arbery, and the consistent outpouring of love you have shown my family. I am grateful for it all. There is nothing that is without value, from the smallest to greatest words, gestures, and contributions,” Ms. Cooper-Jones began, before going on to open up about what it took to raise Ahmaud as well as her other children.

“Ahmaud was more than a jogger murdered in Brunswick,” she went on. “He was my baby boy. I gave birth to Ahmaud on Mother’s Day of 1994, at the age of 22. He was my third and last child. When Ahmaud was in Kindergarten I became a single mother, ceasing the relationship with his father. Being a single mother did not come without hardships but being a mother is one of the most rewarding titles I have ever had the pleasure of being called. When I made the decision to become a single mother, I also decided to never deprive my children of things they needed. I worked two jobs for 12 hours a day, for 15 years to provide for my children. I did this alone and I did not ask for or receive any help in raising Ahmaud.”

In the rest of her letter, Ms. Cooper-Jones takes issue with the I Run With Maud social media page, which she says initially only served as a memorial page — not a business. She adds that she was not asked to take part in the I Run With Maud trademark, and also states the founding members of the 2.23 foundation did not have a close relationship with her son.

“The Trademark for I RUN WITH MAUD. I did not agree to the trademark nor was I asked to be a part of it. On May 9, 2020 a trademark application was filed. This was the day after Ahmaud’s birthday; two days after the arrest of the McMichaels; and the date we set aside to release balloons in honor of Ahmaud, a very emotional time for us all. One of the trademark applicants had never even met my son, yet applied for this trademark in an attempt to profit off Ahmaud’s name,” she revealed.

Ms. Cooper-Jones also states that while she is grateful for the GoFundMe in Ahmaud’s name, it was not something she asked for.

“Since the passing of Ahmaud, I have returned to work because to work is all I know. To hear some people suggest that losing my son is a profit scheme is incredibly offensive to me and my family,” she says.

“I could not remain silent, I not only speak for myself, but most importantly I speak for my son. What is important to me is to gain justice for my son and find peace. I am so disappointed that I must address this issue. The truth is I buried my son and there is nothing about a trademark, a social media page, money, or control that will fix that. I now must protect my son’s name. The grief is a fight every day of my life. Fighting for justice is something I must do each day and every minute of the day.,” she adds.

Please read her full statement below and keep her family in your prayers at this time.