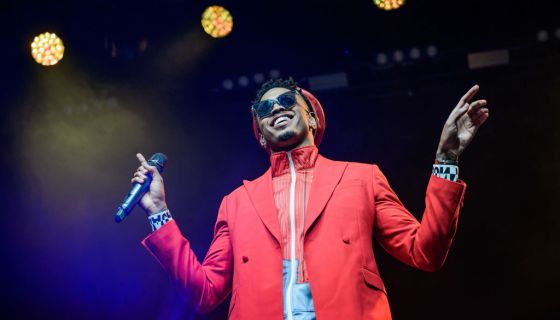 For the first half of July, August Alsina and Jada Pinkett Smith have been widely discussed ever since Alsina revealed to Angela Yee that he was in a “relationship” with Smith. Now, the singer is speaking out even more with an interview with Vulture.

At first, Jada and her husband Will Smith kept silent about the news that shocked the world. However, last Friday, Will and Jada held a special Red Table Talk where she acknowledged that she was in an “entanglement” with August.

Smith was clearly disturbed by the word “entanglement” because he pushed Jada to call it a “relationship” on the show. After the episode aired, Jada received more heat from social media with folks making fun of Jada’s word “entanglement.” By many people’s standards, “affair” was more of an appropriate word even though Will and Jada acknowledged that they had taken a break from each other before Jada became involved with August.

Others criticized Jada for involving herself with Alsina in the first place, especially when he was becoming very physically ill at the time with what is now known as Guillain-Barré syndrome, an autoimmune disorder. Jada admitted herself that she got involved with Alsina because she liked being a caretaker.

“It all started with him just needing help, me wanting to help his health, his mental state,” she said on Red Table Talk. Jada also admitted that she was in a vulnerable state since Will was “done” with her at the time. “I was in a lot of pain and I was very broken,” she told Smith at the table. “In the process of that relationship, I definitely realized that you can’t find happiness outside of yourself.”

Despite Pinkett receiving a lot of criticism for her use of the word “entanglement,” August said he agrees with the word. Check out his responses to the situation from his Vulture interview below.

On the word “entanglement”:

“I don’t know why that word is such an issue. I would agree [with Jada]. If you look up the definition of “entanglement,” it is a complex and difficult relationship. It was exactly that. I think it’s just the language that probably stuck out to people. But I definitely have to agree with it being an entanglement. It definitely was something complicated, a complicated dynamic.”

On why he decided to speak out about his “entanglement” with Jada:

“People looked at me as this problematic guy who was super reckless, like I’m pushing up on someone’s wife. I didn’t really like that. I didn’t like the sound of that, especially when it wasn’t the truth. I think because people didn’t have the truth, it allowed them to view me and my character a certain type of way. And that started to really eat at my soul, but deeper than that, it started to fuck with my partnerships and business relationships and money because of people seeing me as this reckless guy who’s, like, publicly announcing his love and pushing up on somebody’s wife, quote, unquote. That’s really the only reason I felt the need to speak my truth.”

On whether he regrets getting romantically involved with Jada:

“There is no right or wrong here. With there being no right or wrong, there is no regret. There’s nothing to regret because it’s not something I went searching for. It’s not something I went after. I don’t go after people’s girls. Nobody preyed on me or was a predator towards me. This is none of that. It just is. It just was. So I don’t feel any reason to have regrets. Every lesson man, every, every relationship, every experience is a blessing. You learn from it, whether good or bad. I could never say that I regret being given the gift of experience and love. It’s a lesson.”

On navigating the healthcare system:

“There are Black women who die while trying to give life to newborns because Black people are always overlooked, under-cared-for, underprivileged. It’s been what it has been since the beginning of time. I know from my own experience dealing with the health-care system, having to spend so much money to go to the doctor and still be overlooked. And I’m someone who has resources.”

“Probably a year ago when I first started getting really, really sick, before I ended up paralyzed, when I was on the journey towards it, I checked myself into the hospital three times.”

“By the third time, I was taken into a bigger hospital, and I had to find a neurologist. The doctors who admitted me into the bigger hospital were like, ‘There’s no way that you could possibly live in this world like this.’ I literally couldn’t move. The other doctors saw the same thing that the doctor saw on my third visit. But those other doctors didn’t give a fuck enough to do a deep dive. The reality is that I could have been dead, because by the time I got to the bigger hospital, the doctor told me that my respiratory system was shutting down, and it was good that I got in when I did.”

On his health now:

“My health journey has been a complex one, unpredictable to say the least. I realized that I’ve been having a fight for my life. So many of my health struggles start spiritually and then manifest into my physical body. My journey is having to go into those deep parts within myself and everything that I have buried and crammed deep down, and facing those parts that a lot of us may or may not want to see within ourselves.”