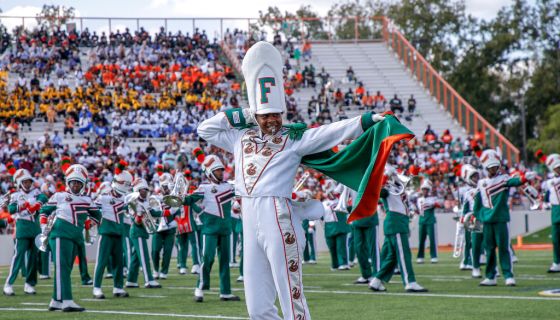 FAMU’s is not only notable for its high achieving scholars but also the influential Marching 100. Their college band program has been a staple in Southern marching band culture for years — alongside programs like Southern University and Jackson State University — which often become viral sensations for their popular renditions of trendy songs.

FAMU’s inclusion in the Louis Vuitton fashion show in Paris is not shocking to true music lovers across the country. If any band program was more aligned with a classy runway show, it would definitely be those rattlers.

Attendees like Kendrick Lamar are seen at the show enjoying their unforgettable entrance.

While others recognize that Beyoncé was greatly influenced and paid tribute to HBCU culture in that iconic Homecoming performance.

The industry has come a long way, celebrating the musical contributions of our people. One fan acknowledges these sentiments underneath the thread saying, “We done came a long way and are making strides!!! #proudblackmoment”

What a way to wrap up the final weeks of Black Music Month! Congrats to FAMU for an exciting performance in Paris! Check out the full performance here.