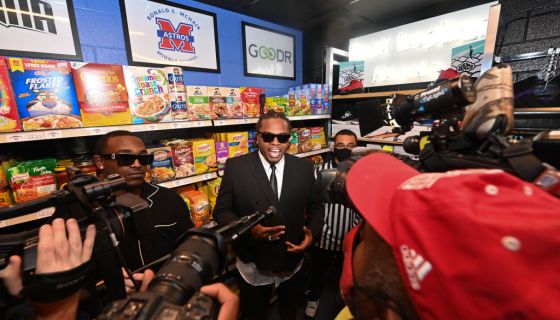 The store officially opened yesterday (September 16) inside of Gunna’s former middle school, McNair Middle School, which he attended along with his four brothers. The ribbon cutting ceremony was preceded by the official declaration of “Gunna Day” as September 16 in the City of South Fulton by mayoral Proclamation.

Goodr Co. founder Jasmine Crowe posed happily beside the rapper as they opened the doors to the first-of-its-kind clothing and grocery store, which provides necessary resources for free to children and families in the South Fulton community. Goodr Co. was created with a focus on eliminating food waste and hunger. The company diverts food waste from businesses and redistributes food to those in need.

The company’s site details its mission as:

At Goodr, we believe that hunger isn’t a scarcity issue. It’s a logistics issue. Even with many social programs that aim to end hunger, the current food supply chain ecosystem in the United States has failed to solve this problem which has grown into a national epidemic. Every year in the United States, we waste over 72 billion pounds of edible food, yet 42 million people are suﬀering from food insecurity. At the same time, over $40 billion in tax benefits for businesses goes unclaimed annually. We believe the solution is simple: Feed more, waste less. Goodr provides a secure ledger that tracks an organization’s surplus food from pickup to donation, delivering real-time social and environmental impact reporting analytics. The Goodr model aims to provide a triple-win solution by improving an organization’s bottom line through charitable tax donations, reducing its greenhouse emissions from landﬁlls and getting its edible surplus food to local communities in need.

In an effort to continue supporting his community, Gunna has collaborated with Goodr Co. to uplift and motivate children by providing them with the resources they need to focus on excelling. On a day where he was celebrated for his hard work in entertainment, he diverting the attention  to celebrating the youth, who will come after him. That is the legacy Gunna and Goodr Co. hope to leave behind.

Support the cause and learn more at Goodr Co.’s website.