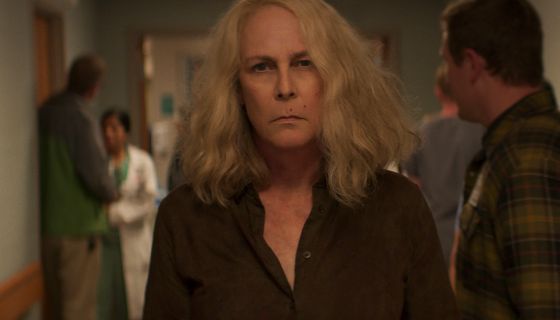 Legendary scream queen Jamie Lee Curtis has been surviving Michael Myers for 43 YEARS as one of the few people who escaped his stabby rampage that continues in bloody slasher sequel “Halloween Kills.”

In 2018, David Gordon Green’s “Halloween” reboot starring the iconic actress killed at the box office with more than $250 million worldwide becoming the highest-grossing chapter in the four-decade franchise while setting a new record for the biggest opening weekend in history for a horror film starring a woman.

And the Halloween night when Michael Myers returned isn’t over yet.

But when Michael manages to free himself from Laurie’s trap, his ritual bloodbath resumes. As Laurie fights her pain and prepares to defend herself against him, she inspires all of Haddonfield to rise up against their unstoppable monster.

The Strode women join a group of other survivors of Michael’s first rampage who decide to take matters into their own hands, forming a vigilante mob that sets out to hunt Michael down, once and for all.

We had the honor and pleasure of chatting with Jamie Lee Curtis who opened about the scary sequel, surviving Michael Myers, her favorite Halloween candy and more in our interview you can view below:

Fans of the franchise can expect more familiar faces like Kyle Richards who returns as “Lindsey Wallace”–one of two Michael Myers survivors saved by Laurie Strode (Curtis) in the original “Halloween,” 43 years ago.

She, along with Anthony Michael Hall who plays “Tommy Doyle”–the second Michael Myers survivor saved by the iconic heroine–bring pure nostalgia to the buzzy film that Curtis calls a “masterpiece.”

“The power, of the rage of voices, big groups of people coming together enraged at the set of circumstances, [is] what the movie is [about],” said Curtis in an interview with SiriusXM.

“[But] when you see it, it’s a seething group of people moving through the story as a big angry group,” she explained. “It’s really, really, really intense. It’s a masterpiece.”

“Halloween Kills” is now playing in theaters/streaming exclusively on Peacock!

Take A Hike Day: Visit 10 of the World’s Most Scenic Hiking Trails [List]

The Daily Grind Video CLOSE Source: AscentXmedia / Getty Grab your hiking boots, a light snack, and some water because today,