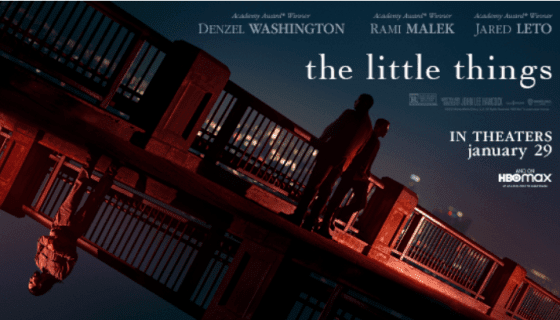 Guess Which Reality Show Helped Denzel Washington Prepare For His Role In ‘The Little Things’?

If you’re looking for something suspenseful to watch this weekend, we should probably point you in the direction of HBO Max, where ‘The Little Things’ is now playing. Starring a powerful triumvirate of Oscar Winners, ‘Little Things’ is about a frustrated detective Jim Baxter (Rami Malek) who enlists an unorthodox sheriff’s deputy with a dubious past (Joe “Deke” Deacon played by Denzel Washington) to help him solve a string of murders. Jared Leto outcreeps himself as the suspected serial killer Albert Sparma, who the pair believe are behind the killings. The film was written and directed by John Lee Hancock, who apparently wrote it back in 1992 and left it alone for several decades before producer Mark Johnson got him to pick it back up.

“If ain’t on the page, it ain’t on the stage,” Denzel Washington said during a junket for the film when asked what drew him to the project. “I read the script and found it interesting. I thought it was different. It was the opportunity to work with these two young (er than me) great actors and to interpret John’s script.”

“I loved the idea of Jim beginning to emulate Deke and the psychology that would take me down as an actor and this character,” Rami Malek said about what drew him to his role. “Starting out with this really altruistic perspective and having that type of conviction turn into obsession, was something psychologically that was really complicated. Like Denzel said, John Lee’s script was aces right from the beginning. One of those scripts that you just fly right through. The Denzel of it all is a no-brainer and in comes Jared and I know there is going to be some explosive energy in there with all of us. Couldn’t pass that up.”

While Leto is known for his rockstar good looks and has been the face of more than a few modeling campaigns, Sparma is pretty far from that. His hair is long and stringy. He has a potbelly and a strange walk. Still, you couldn’t tell Leto that he’s not playing a real winner in “The Little Things.”

“When I think about Albert Sparma, I think of him as kind of a charmer,” Leto joked. “I guess I wasn’t on the receiving end of whatever might seem scary or terrifying. I thought of him as kind of a lovable guy. John Lee Hancock, amazing director, we had met about a year before, I think I chased him down because I said ‘The Founder’ this incredible movie, Michael Keaton was just spectacular, it was shot so incredibly and I really wanted to work with him. John Lee was the first line of defense, my guide through the process.”

As it turns out, Denzel, who has mastered playing law enforcement officers on film doesn’t have any go to detectives who guide him in real life. Instead, he revealed during the junket for the film that he counted on “The First 48” to help him.

“There’s a show called ‘The First 48″ and I’m hooked,” Washington confessed. “Or was. I haven’t watched it since we finished the movie. These detectives, it’s one of these reality docuseries, just watching their behavior and how they go about things and their tenacity. I started there, well I started with the script, but I went there.”

Imagine how that’s gotta feel for the cops on “The First 48.”

Because of the stellar cast, expectations run high for ‘The Little Things,” but while they’re chasing a killer the real story is about human error, so keep that in mind before you begin and you won’t be disappointed. Also, you might want to keep the lights on and enlist company if you’re easily scared. The thrills are real with this one.