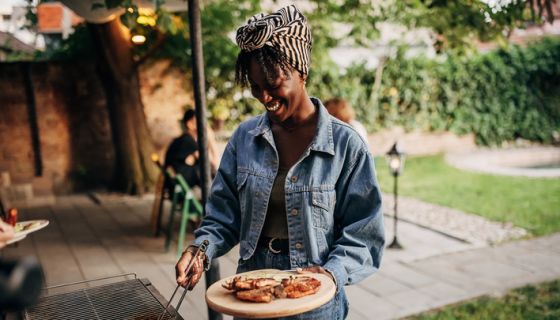 Happy National Grilling Month: Are We the Generation to Stop Throwing Things on the Grill?

Summer is in full swing, but are the cookouts? July is National Grilling Month, celebrating the delicious foods we eat straight from the grill. Popular holidays like the Fourth of July has caused a bit of discourse online. Are we the generation that stops throwing things on the grill?

The month of July brings the heat and it provides the perfect time to invite family and friends over for a day out by the pool. National Grilling Month in July also ushers in fun times grill-side. Grilling dates back to caveman times in history. There are no set records of how cavemen discovered grilling, but some historians believe that cavemen might have eaten animals that were killed by forest fires. After eating the cooked meat, the cavemen may have found their meal to be much more enjoyable and easier to digest. Other scholars think that in those days, animals would freeze very soon after being killed, so the cavemen would use fire to warm their meal, and it would be this proximity to the fire that would lead to the meat being “grilled.”

Since the age old times of cavemen making meals out of nothing, people have been grilling all kinds of things besides animal remains.

Now, we have access to many tools to create masterful and colorful meals filled with delicious meats, veggies and even fruit. Foodies can choose a stovetop, oven and even an air fryer over setting food to a grill. Grilling requires a bit more preparation than the aforementioned tools listed above. Superior grillers know that you need the right coal, appropriate spatulas, seasoned food and the perfect backyard grill.

The question becomes: Will this generation be the grilling’s demise? Social media users complain on Twitter about how this generation is more concerned with who’s bringing the Casamigos and not who’s throwing meat on the grill.

When there is so much access to food service apps like Doordash or UberEats, the new generation prefers convenience over cooking. Air fryers are the modern day microwaves making it super easy and quick to create our favorite meals.

Who needs a grill when you have an air fryer?

Will the real men please stand up?

How did our parents, grandparents and ancestors find the time?

Yeah, we’re just going to keep our grilling skills to ourselves before the Internet eats us faster than chicken wings off the grill.

Will this generation be the end of traditional cookouts and barbecues? Comment your thoughts about the future of grilling below.