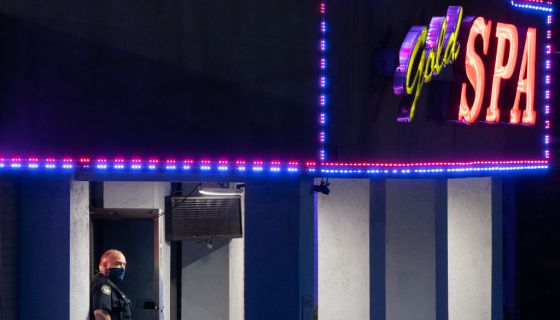 A police officer stands outside a massage parlor where three people were shot and killed on March 16, 2021, in Atlanta, Georgia. | Source: ELIJAH NOUVELAGE / Getty

Eight people are dead after shootings at three massage parlors in the Atlanta area on Tuesday, March 16. Following reports, police have arrested 21-year-old Robert Aaron Long, who they believe acted alone in the shooting spree that killed six Asian women, Washington Post states. While this was an obvious hate crime against the Asian community, police reportedly say Long may have had “additional motives.” “He made indicators that he has some issues, potentially sexual addiction, and may have frequented some of these places in the past,” Sheriff’s Capt. Jay Baker reportedly said at a news conference. “We still have a lot of things to process.”

Since news of the shooting spree broke, several celebrities have taken to social media to spread awareness as #StopAsianHate trends online. “The targeting of our Asian brothers and sisters is sickening, but not surprising given the normalizing of anti-Asian hate speech in the past year. We have to #StopAsianHate, enough is enough!,” actress Mindy Kaling wrote.

The targeting of our Asian brothers and sisters is sickening, but not surprising given the normalizing of anti-Asian hate speech in the past year. We have to #StopAsianHate, enough is enough!

My condolences goes out to the families of all the victims and the entire Asian community tonight on what transpired in Atlanta at the Aromatherapy Spa. Coward a** young man!! Just senseless and tragic!! 🙏🏾❤️👑

Targeted, hunted down, 8 murdered. We do not feel safe. #StopAsianHate

The violent attacks and murders against Asians are still happening.
Please help us.
We need help to be safe in our country.#StopAsianHate. Please. pic.twitter.com/NJ3knm1hlo

Three days ago, the leader of the House GOP called it the “China Virus” again.

Words have consequences, especially those from our leaders.

Reporters: Ask politicians who trade in racism if they feel responsible or remorseful for violence committed in the wake of their words.

These women were people, with loved ones. They were struggling and marginalized. And if an eyewitnesses account is correct, they were targeted because they were Asian.

Hold them in your hearts. Think of their families. And #StopAAPIHate

We are praying for the Asian community at this time and will continue to keep you updated as more news on these senseless killings becomes available.

Florence Arman – Out of the Blue