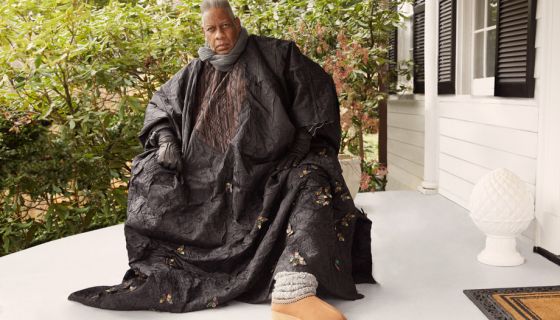 Rest Easy, Legend: After André Leon Talley’s Many Contributions To Vogue, This Is How The Publication Honors Him

Fashion icon and former Vogue editor André Leon Talley died at 73 years old on Tuesday (Jan. 18). The unfortunate news story broke yesterday to the disappointment of the entire fashion industry and thousands of fans Talley has inspired over the years. Despite the devastation, the major fashion publication – for which Talley dedicated most of his career – seemingly had the absolute worst timing in their coverage of his life and untimely death.

Fans are calling Vogue Magazine “tasteless per usual” after the magazine posted an article from 2016 30 minutes after Talley’s death was announced, titled “Bad Vibes, Be Gone: How to Energetically Clear Your Space With Sage.” Some fans declared this was not merely a coincidence because of how far back the article was originally published. Most of the publication’s repurposed articles from recent weeks date back to 2019, at the latest.

One Twitter user, @aizehinomo, shared a thread saying, “this is what Vogue thought was appropriate to tweet 30 minutes after the death of beloved fashion legend and former Vogue Creative Director and Editor-at-Large Andre Leon Talley was announced to have passed. Quelle coincidence. Interestingly tasteless as per usual.”

Shortly after the backlash, Vogue deleted the tweet and shared an article commemorating his legacy.

Talley had been vocal about his disagreements with longtime friend, Vogue Global Content Director, and Condé Nast Global Content Adviser Anna Wintour. The late fashion change agent wrote a memoir in 2020 titled The Chiffon Trenches where he called Wintour “ruthless” and “not capable of human kindness.” Prior to his passing, Talley admitted to multiple news outlets that his friendship with Wintour had become strained in recent years, after 2018, when he lost his longtime gig interviewing stars on the Met Gala red carpet to a YouTube personality and influencer.

There also appear to be other reasons for their distant friendship in his last years of life. Talley sat down with talk show host Tamron Hall to discuss the financial disparities Black men face in the fashion and media industries. He shared his personal financial crisis issues, detailing how, after nearly losing his home of 16 years, his salary at Vogue failed to measure up to the earnings of his White counterparts at the publication.

Watch the clip from the interview below:

Wintour released a statement honoring Talley’s impact on the fashion industry at large:

“The loss of André is felt by so many of us today: the designers he enthusiastically cheered on every season, and who loved him for it; the generations he inspired to work in the industry, seeing a figure who broke boundaries while never forgetting where he started from; those who knew fashion, and Vogue, simply because of him,” Wintour shared on Vogue’s website Wednesday (Jan. 19). “And, not forgetting, the colleagues over the years who were consistently buoyed along by every new discovery of André’s, which he would discuss loudly, and volubly.”

“No one could make people more excited about the most seemingly insignificant fashion details than him. Even his emails were a highly anticipated event, something we all looked forward to,” Wintour continued in the statement. “Yet it’s the loss of André as my colleague and friend that I think of now; it’s immeasurable. He was magnificent and erudite and wickedly funny — mercurial, too.”

Wintour didn’t shy away from their rough past, saying, “like many decades-long relationships, there were complicated moments, but all I want to remember today, all I care about, is the brilliant and compassionate man who was a generous and loving friend to me and to my family for many, many years, and who we will all miss so much.”

“No mention of André Leon Talley on the Vogue homepage, where the first story I saw promoted on their homepage was a two-day-old interview with Megan Fox and Machine Gun Kelly,” D’Addario tweeted. “To quote someone from when magazines were great, ‘There is a famine of beauty…’”

André Leon Talley’s contributions to the fashion industry and one of the largest fashion publications in the world will never be forgotten. Rest easy legend.