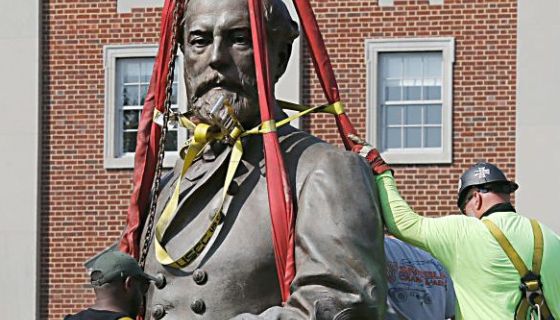 The state of Virginia orders to take down the 12-ton Robert E. Lee statue that has been placed in Richmond since 1890. More than a year later, legal matters have been settled to remove the city’s largest Confederate monument.

On Wednesday, September 8, the statue was lifted from its pedestal in one concrete piece and placed in storage. Democratic Gov. Ralph Northam, amongst the town’s resilient activists, was present for the statue’s removal this morning.

The monument sat six stories high as a daily reminder of America’s wicked racial past. The 130 year statue became a symbol of the Confederacy’s dark history and heritage. The crowd chanted and cheered as the statue of the Confederate General Robert E. Lee, who sat atop a horse, was lifted into the air by a crane.

Decades after the statue’s erection, the monument became a mere reflection of the affluent, all-white neighborhood it rested in. Lee was eventually joined by statues of several other Confederate leaders. Until, a statue of Black tennis champion Arthur Ashe was added to the notable avenue of statues in 1996. The first Black governor of any state since Reconstruction, then-Gov. Douglas Wilder, eagerly added Ashe to the row of oppressive states despite major opposition.

Gov. Northam announced plans of the statues removal in June 2020 after nightly racial justice protests erupted in Richmond, similar to many other cities across the states. The protests were a direct response to Minneapolis police’s public killing of George Floyd. The plan was halted due to lawsuits, including one from a group of residents from Richmond’s historic Monument Avenue that wanted to keep the 40-foot-tall memorial intact.

Ultimately, the Virginia Supreme Court decided to take the statue down.

Lee’s statue was the largest Confederate monument in the city of and one of the largest in the entire country. Thanks to persistent activists and the wake of mass protests throughout the country, nearly every other Confederate statue in Virginia’s capital was removed last summer, either by protesters or the city itself at the request of Mayor Levar Stoney.

Though many activists praised the monument’s removal, they noted it was only one of the demands they’ve made.

According to NPR, official report the graffiti-covered pedestal will remain in place will discussions continue about the future of Monument Avenue. There are plans to incapsulate the current history to represent the state of Virginia today.