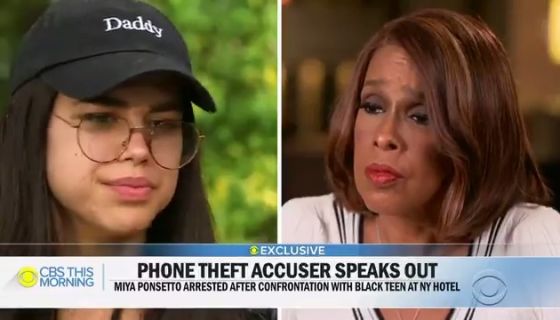 A 22 year old woman was caught on camera allegedly physically assaulting a 14 year old Black teenager and falsely accusing him of stealing her phone in a New York hotel last month. Miya Ponsetto has since been arrested in California without bail and she will soon be extradited to NYC. Ponsetto and her attorney spoke with CBS’s Gayle King in an exclusive interview that is now trending on Twitter a few days prior to the arrest.

The 22-year-old woman caught on camera allegedly physically attacking a 14-year-old Black teen and falsely accusing him of stealing her phone was arrested in California.

In an exclusive interview, Miya Ponsetto and her lawyer spoke with @GayleKing hours before she was arrested. pic.twitter.com/ezaGkcWZ8j

In the latest interview on CBS, Miya Ponsetto seems uninterested in giving a sincere apology to the Harrold family for the distress she caused throughout the process. Ponsetto continuously denies racial profiling in the video nearly stumbling over her words to get out a clear statement. She admits that the phone was later found and given to her by hotel staff, though there is information on the Internet that says otherwise. One statement says that the phone was later discovered by in an Uber and returned by the driver, which would mean the young California resident misplaced her phone and blamed an innocent Black teenager for her irresponsible actions.

The Uber driver getting back with SOHO Karen’s iPhone pic.twitter.com/N8JIWbL10L

Another case of a White woman working tirelessly to spin the narrative in her favor.

Ponsetto has a history of run-ins with the law including 2 DUI busts in 2020 and getting arrested with her mom in February for alleged public indecency while being drunk at the Peninsula hotel in Beverly Hills.

Grammy award-winning trumpet player Keyon Harrold, father of the teenager who was assaulted in the original video, uploaded the violent attack towards his son to Instagram. The two were minding their Black business waiting in the Arlo SoHo hotel lobby to enjoy breakfast when Ponsetto, affectionately referred to as SoHo Karen, accused the teen of stealing her iPhone. She even plead with hotel staff saying the young teenager used his case to disguise her phone as his own.

“I am furious!!!” Harrold Sr. captioned his Instagram video. “We see this crap happening all the time, but it hits different when it hits home!!! I typically try to keep things positive, but nothing about this video is positive.”

Ponsetto is seen on video attacking the teen and attempting to search his pockets for her phone. To add fuel to an existing flame, a hotel worker used his “managerial authority” to demand that the teen show his phone’s background screen to prove it was not Ponsetto’s iPhone.

Civil Rights Attorney Ben Crump issued a statement asking for the woman to be charged with battery and assault. “Compounding the injustice, the hotel manager defaulted to calling on 14-year-old Keyon to prove his innocence, documenting that we have two justice systems in America and that Black people are treated as guilty until proven innocent,” he said in a statement to Revolt.

He continued, “We strongly urge Manhattan District Attorney Cy Vance Jr. to bring assault and battery charges against this woman to send the message that hateful, racially motivated behavior is unacceptable. This is what it will take to drive change. We also call for a civil rights investigation into the Arlo Hotel for its implicit bias in its treatment of Keyon.”

It appears Crump’s efforts were met with an arrest without bail, and the Harold family received due justice. Rudely, Ponsetto speaks with Gayle King in the interview with CBS. King and her colleagues sit in disbelief after watching part one of the interview. Twitter users react to the unpleasant interview:

Miya Ponsetto, aka Soho Karen from the Arlo Hotel, who tf raised you?! You assault a 14 yr old boy + smugly tell reporters “I’m 22 and Puerto Rican. I don’t really see the problem.”

Make sure to keep that same energy in court. pic.twitter.com/MPlQTBslF5

LRT – How soon can we expect Miya Ponsetto aka Soho Karen to show up on Red Table Talk? pic.twitter.com/klptOdQZPA

How would you have reacted if you or your child were attacked by a SoHo Karen?

Hannah Hausman – Will I Ever Feel Like This Again