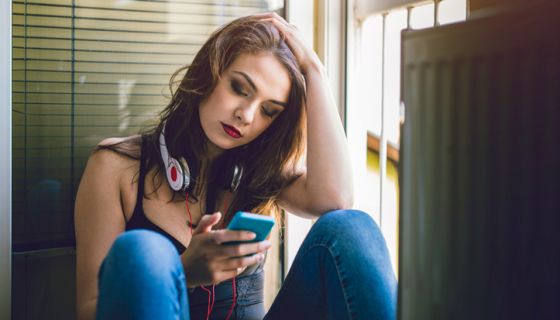 This was super eerie. Around this time two years ago, people all over America received Valentine’s Day texts and other messages from old flames, dead loved ones, and more. The mishap caused a lot of grief, as well as some pretty awkward conversations. According to reports, the messages were originally sent on, or around Valentine’s Day, but never actually went through.

The Verge reported at the time:

Something strange is happening with text messages in the US right now. Overnight, a multitude of people received text messages that appear to have originally been sent on or around Valentine’s Day 2019. These people never received the text messages in the first place; the people who sent the messages had no idea that they had never been received, and they did nothing to attempt to resend them overnight. Delayed messages were sent from and received by both iPhones and Android phones, and the messages seem to have been sent and received across all major carriers in the US. Many of the complaints involve T-Mobile or Sprint, although AT&T and Verizon have been mentioned as well. People using regional US carriers, carriers in Canada, and even Google Voice also seem to have experienced delays.

So what actually happened? Phone services were blaming a third party system.

At fault seems to be a system that multiple cell carriers use for messaging. A Sprint spokesperson said a “maintenance update” last night caused the error. “The issue was resolved not long after it occurred,” the spokesperson said. “We apologize for any confusion this may have caused.” T-Mobile blamed the issue on a “third party vendor.” It didn’t clarify what company that was or what service they provided. “We’re aware of this and it is resolved,” a T-Mobile spokesperson said.

“It was a punch in the gut. Honestly I thought I was dreaming and for a second I thought she was still here,” said one person, who goes by KuribHoe on Twitter, who received the message from their best friend who had died. “The last few months haven’t been easy and just when I thought I was getting some type of closure this just ripped open a new hole.”

Barbara Coll, who lives in California, said she received an old message from her sister saying that their mom was upbeat and doing well. She knew the message must have been sent before their mother died in June, but she said it was still shocking to receive.

“I haven’t stopped thinking about that message since I got it,” Coll said. “I’m out looking at the ocean right now because I needed a break.” Coll said her sister also received a delayed message that she had sent about planning to visit to see their mother.

What in the actual hell.