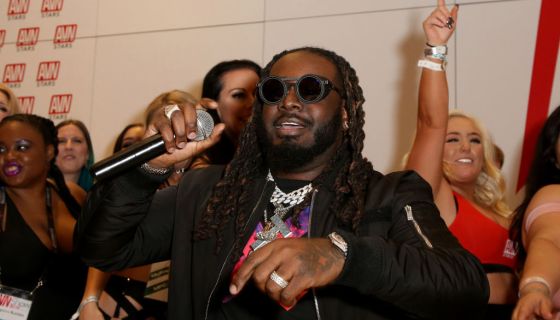 T-Pain Is Launching His Own Podcast: Nappy Boy Radio

T-Pain has worked with the biggest names in music, so it’s only right his latest venture comes in the form of a podcast, where he can tell stories about the industry, making music, and everything in between.

The super producer  is introducing his own podcast and video show titled Nappy Boy Radio in partnership with podcast platform PodcastOne.

“Too many conversations and interactions I was having with various people kept ending in the same way, with me saying, ‘Damn, we should have recorded that,’ so we decided to do just that and launch the Nappy Boy Radio podcast,” T-Pain said in a statement to Deadline. “Partnering with PodcastOne, a company that is talent first, was a no-brainer for us.”

The show is set to debut on June 3 and will include conversations between T-Pain and some of his celebrity friends like Mike Tyson, Slim Jxmmi, Lil Jon, Steve-O, Peyton List, Xolo Maridueña, Jacob Bertrand, Joe Seo, and Jazzy Pha.

“At PodcastOne, we seek hosts who are charismatic and engaging with something to say that audiences want to hear,” said Kit Gray, president of PodcastOne. “T-Pain is all that and more. His innate curiosity and interest in the world around him and the people who live in it offers up endless possibilities for show content  and we cannot wait to launch Nappy Boy Radio with T-Pain.”

Conveniently enough, T-Pain will record episodes of Nappy Boy Radio in his new podcast studio. Throughout the show, the artist and his guests will discuss everything including music, tech, gaming, exotic cars, alcohol, and more.

This announcement comes after a recent viral moment from Tallahassee Pain, who didn’t realize until recently that Instagram filters Direct Messages into different folders depending on whether you follow them or not. Because of this, Pain released a  public apology  to all of the celebrities he’s been inadvertently ignoring over the years, posting a video showing hundreds of unread messages that he didn’t know were there.

It’s safe to say he won’t have a shortage of folks trying to get on his podcast.