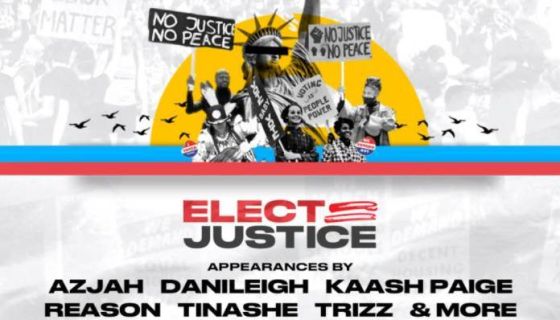 In this moment, nothing is more important than getting people to the polls to vote no. 45 out of office.

From Michelle and Barack Obama to LeBron James, our faves have been spreading the message and doing their best to get the youth active in this current election. This evening, and in partnership with Elect Justice, TIDAL is hosting a “National Vote Early Day” livestream. The goal is to encourage early voting in communities of color. Attorney and political analyst Angela Rye will host, alongside Terrence J.

The livestream will also feature sounds by the one and only D-Nice, in addition to special appearances by Dani Leigh, Kaash Paige, Tinashe, and more.

“In tandem with the livestream, Elect Justice will hold a live event from The Forum on Saturday (10/24) providing community services as well as an opportunity to cast ballots to residents in Inglewood, CA. Services will include: ballot drop-off, PPE, essentials and food giveaways,” TIDAL announced via press release. “The ‘National Vote Early Day’ livestream adds to the growing list of exclusive content and unique experiences available for TIDAL members. The livestream further solidifies the platform’s commitment to elevating the connection between artists and their fans by providing subscribers with more than just great music.”

Be sure to tune in!