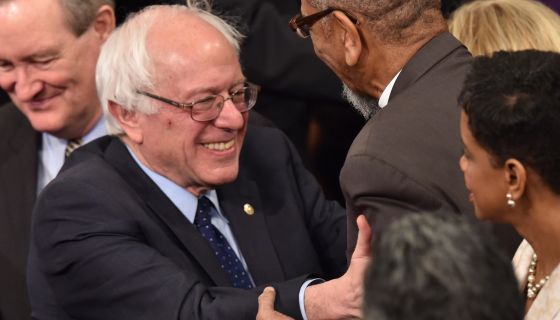 The news is full of press surrounding this morning’s inauguration ceremony and celebration. Onlookers partake in social media commentary about the fashion from former presidents and the Harris family, the youngest performer of in Inauguration history and her breathtaking poetry, and J-Lo and Lady Gaga’s official performances to usher in our newly elected President Joe Biden and Vice President Kamala Harris. The memes are infinite from today’s celebration, but the one that is still heating up the timeline is that of US Senator Bernie Sanders. Sanders posed safely seated during the ceremony masked up, six feet apart from the other attendees, legs and arms crossed snuggled inside his warm coat and gloves in DC’s cold weather. Twitter is having a field day photoshopping him into different settings and using Bernie as the meme of the week.

The American politician and former presidential nominee sits cozied up in his printed mittens without a care in the world. Bernie Sanders has been meme’d quite a bit in the past, so he’s certainly not new to this. It is always such a treat when we can find him on the timeline yet again. Here is a round up of our favorites from today:

Someone bring el tio Bernie some tamales and champurado 💀 pic.twitter.com/cpx0NoLg71

Everyone’s joining in on the fun with this one today. This Twitter user mocks former Vice President Mike Pence in this hilarious tweet replacing the fly that was infamously camping out on Pence’s head during this debate with the photo of Bernie Sanders.

god damn it, it was Bernie pic.twitter.com/zx2mLbnUoI

It is no question the girls were serving today at this long-awaited inauguration ceremony, so this meme is fitting. The Obamas are flaunting their high fashion fits while Bernie is cozy and comfortable in his foldable chair.

Bernie out there doing it right 🥶😂 pic.twitter.com/E7KugBJvVJ

One small seat for Bernie.
One giant leap for mankind.

Now, this meme is out of pocket. Not Bernie the Bayonette dancer!

YALL GET ON MY NERVES😭 got Bernie with the bayonettes 😭 pic.twitter.com/90QbaHuWLT

Bernie Sanders, first of his name, Wearer of Mittens, Sitter of Chairs pic.twitter.com/1j6p8mrdlr

Who knew the National Farmers Union had a verified Twitter account? Also, who is their social media manager and why are they so hilarious?

Did we do the Bernie meme thing right? pic.twitter.com/ZMnx8Ud5nM

Which Bernie album will you listen to?

Which Bernie album you listening to first? pic.twitter.com/JjT3nXcKy3

OH NO BERNIE YOU HAVE TO GET OUT OF THERE pic.twitter.com/lAPOAUffSd

The memes are still rolling in as the day continues. These are simply a few of our favorites that have brought a bit of joy to the timeline. Thanks to Bernie Sanders for keeping us entertained by simply minding his business, staying safe and being himself.