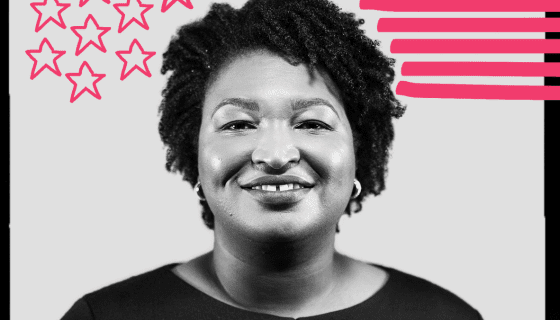 The state of Georgia elects Raphael Warnock as US Senator in the Georgia runoff election. Reverend Warnock makes history as Georgia’s first Black US Senator-elect defeating Kelly Loeffler. The real heroine behind this momentous victory is Democratic politician Stacey Abrams. Activists, public figures and people of the community are recognizing Abrams for her voter mobilization efforts in Georgia.

The former Georgia House Minority Leader and founder of Fair Fight, an organization that addresses voter suppression, is being widely credited with registering and mobilizing tens of thousands of Democratic voters for both the US presidential election and the Georgia runoff election. All of the annoying texts and calls were all in a valiant effort to flip the state blue in this special runoff election.

People are rushing to call this Abram’s sweet revenge after the beloved Spelman alum lost in the 2018 Georgia governor’s race against current Governor Brian Kemp. Stacey Abrams quickly pivoted to supporting the state in electing government officials in local Georgia races such as the most recent, pressing US Senator runoff election. To accompany Warnock victory, Georgia and concerned citizens across the US are awaiting final ballots to be tallied for the last seat in the US Senate. It’s currently pretty close as Jon Ossoff leads by 0.4% against David Perdue.

Regardless of the results, the true victor is Stacey Abrams who has proven to rally behind what she feels is best for the people of Georgia and the US. Supporters are celebrating in this victorious and historic occasion across social media with tweets and posts that are absolutely undefeated. Celebrities, public figures and influencers chime in with their excitement about the US Senate seats and the efforts made to get them filled.

The fact that Stacey Abrams & other BIPOC organizers got out the vote despite suppression efforts is the story in Georgia. Republican efforts to disenfranchise their constituents is the story. In Georgia and everywhere else.

It’s time for a new statues in the state of Georgia. start with Stacey Abrams, Latosha Brown, a little splash of white male decency, Raffensberger, and all of Georgia’s voting heroes. This is a beautiful day in the history of America and just what we needed to come out of 2020.

Feeling oddly thankful that @staceyabrams had her own election stolen from her so that she had time to save America. So much work still to be done, but this morning I’m just deeply grateful for Stacey & many others who dedicated themselves to the cause of democracy #StaceyMyHero

YO!!!! @staceyabrams May have just saved our country with GA’s Help!!! We’re watching Greatness!!!!