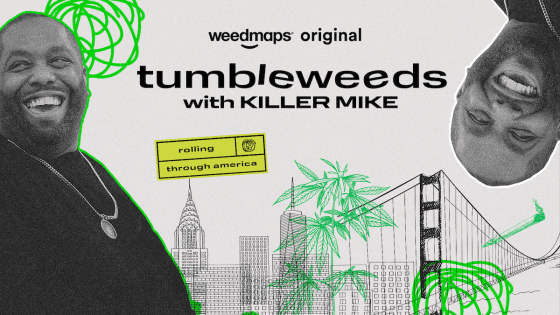 Today (April 6) WM Technology, Inc. and Weedmaps, the leading online marketplace and premier destination for cannabis consumers, dropped the trailer for their forthcoming original cannabis-centric docuseries, ‘Tumbleweeds with Killer Mike.’ Hosted by rapper and activist Killer Mike, the series was produced by Wheelhouse DNA and Wheelhouse Labs and distributed through VICE Media Group. Wheelhouse DNA creates and produces content for platforms from creators across the digital landscape; Wheelhouse Labs is the full-service integrated marketing and creative lab that serves as Weedmaps’ Entertainment Marketing AOR.

Kicking off on April 20, the four-part series will follow Killer Mike as he explores how cannabis and culture intersect in four cities across the country (Las Vegas, San Francisco, New York City and Chicago). From comedy shows to dispensary visits, he will be joined by local personalities to have conversations about the existing perceptions of cannabis, ways to further normalize the industry and showcase what the plant has done and will continue to do for communities around the US.

Throughout the series, Killer Mike will sit down with comedians such as Jocelyn Chia, Napoleon Emil, and Ngaio Baelum, along with American artist and hip hop pioneer, Fab 5 Freddy, and cannabis advocate and Veteran Charissa Jackson (who works with AMVETS).

‘Tumbleweeds with Killer Mike’ originated from Weedmaps’ desire to further conversations around cannabis in a way that felt approachable and engaging to a mainstream audience. Weedmaps aims to educate viewers so that they can support a more equitable and open legal cannabis economy, especially as more markets are legalizing the plant.

In addition to the docuseries dropping on 4/20, Weedmaps will offer access to exclusive, bonus content through its mobile app for the duration of the series. Through this in-app experience, users will be able to learn more about the businesses in each episode, shop for products available in their area, and support AMVETS by making a donation on their site.

‘Tumbleweeds with Killer Mike’ will roll out beginning on 4/20, (a day to celebrate the impact and evolution of cannabis culture in America) with the first two episodes featuring Las Vegas and San Francisco, respectively, followed by New York on May 1, Chicago on May 8 and a marathon of all four episodes on May 15. The series will be available via VICE’s integrated platforms VICE TV and VICE TV streaming apps. You can watch the trailer here.

For more information, visit http://www.weedmaps.com and be sure to tune in to the first two episodes of the four-part series airing on VICE TV on April 20 starting at 10 P.M E.T

RƎƵIN 47 Takes You to an “Unknown Dimension”