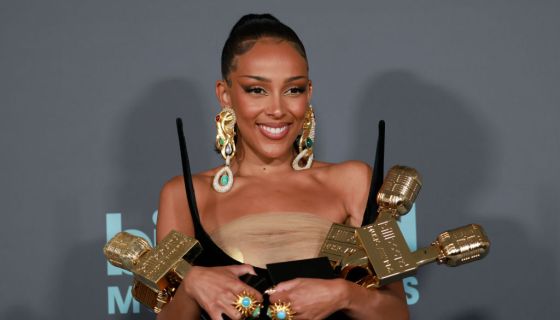 The red carpet was riddled with glamorously dressed celebrities and artists from every genre. Megan Thee Stallion graced the carpet in a sexy, futuristic wrap-around number, accentuating those voluptuous curves. The City Girls became topic of discussion with their formal, asymmetrical dresses, serving 80’s homecoming ferocity. During the City Girls’ presentation of the Top R&B Artist award (which Doja Cat ultimately took home), Jatavia “JT” Johnson had a wardrobe malfunction which left her pretty kitty exposed. While she quickly jumped online to address fans about the malfunction, stating it was just her underwear underneath her dress, the internet wasted no time raving about the mishap in the super short cut sheer, shimmered dress.

Revealing attire aside, many R&B and Hip-Hop faves swept the ceremony, clearing out almost every category in their respective genre. The Weeknd led the pack of nominees with 17 nods. His duet “Save Your Tears (Remix)” with Ariana Grande was up for an impressive six nominations. Behind him, Miss Doja Kitty had an astounding 14 nominations, Justin Bieber and Kanye West trailed with 13 nominations. See the full list of R&B and Rap category winners below. What do you think? Were these awards well-deserved?!

Nominees: Moneybagg Yo, A Gangsta’s Pain

Lil Baby (The Back Outside Tour

Nominees:CeCe Winans, Believe for It

CeCe Winans, Believe for It

Masked Wolf, “Astronaut In The Ocean”

Masked Wolf, “Astronaut In The Ocean”

Nominees: Givēon, When It’s All Said and Done…Take Time

Summer Walker, Still Over It

Hush, Bobby J from Rockaway, Ro Spit & D.L. Jones are ”Livin’ This Lifetime” to the Fullest