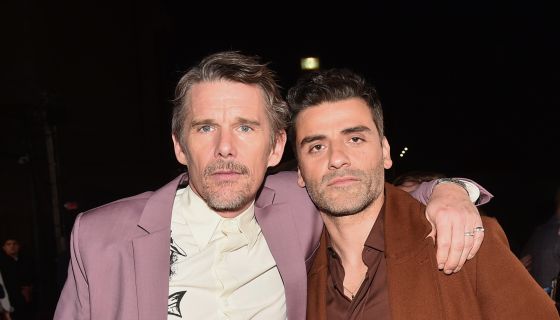 Marvel’s latest buzzy series “Moon Knight” is everything you didn’t know you wanted from the super studio that continues to elevate its golden brand with dynamically diverse characters from the sprawling universe.

In a strange sequence of events, Steven discovers he has dissociative identity disorder and shares a body with mercenary Marc Spector. As Steven/Marc’s enemies converge upon them, they must navigate their complex identities while thrust into a deadly mystery among the powerful gods of Egypt.

I had so much hesitation,” said Issac about playing the mystical character in an interview with THR. “So much. (Laughs.) It was exactly that. I was like, “I just finally got out of a long time of being a part of the Star Wars universe,” which I loved doing, but it definitely took up a lot of my time. So I was excited to get back to more character studies and smaller films.

But this came my way, and my instinct at first was like, “This is probably not the right thing to do.” But there was just something about the Steven character that was speaking to me a little bit. Ultimately, for me, it’s about if there’s space to create something. The size of it doesn’t really matter. Is there space to really delve into a person, a psyche, and to tell a story from the point of view of that person? So I investigated it more and more, and I started doing a deep dive into DID and what it is to struggle with it.

And I realized that the language that’s used to talk about DID is quite fantastical. It’s such a complex psychological thing. You use that kind of Jungian talk. It’s dream logic and dream talk. So it felt like it was quite an organic place to talk about that from a very internal point of view. And then when I found Steven, this characterization, it was almost like, “What would Peter Sellers do if he was asked to be in a Marvel movie?” (Laughs.)

So it just kind of lit a little flame of inspiration, and when I brought a lot of those thoughts to Kevin Feige, to my surprise, he was so open about the collaboration. It just speaks to his willingness to bring in people with very strong points of view and to have that kind of collaboration.”

We caught up Oscar Isaac and Ethan Hawke who talked Marvel’s latest superhero thriller, self-care and more in our interviews below:

“Moon Knight” streams exclusively on Disney Plus on March 30th.