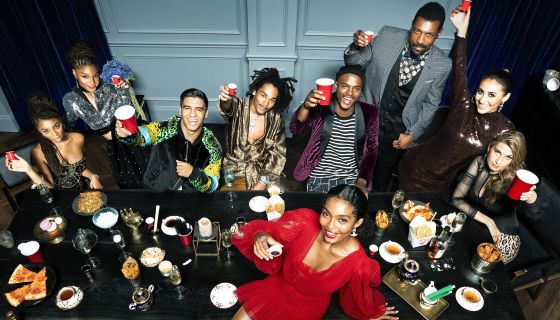 Grown-ish returned with an all-new midseason premiere last week. Yes, our favorite college students are back and better than ever, chasing their on-screen dreams, changing the world, and navigating the messiest of situationships. Ahead of the premiere, the cast caught up with Global Grind to talk season 3B and powering through quarantine in two very interesting virtual interviews.

“Public Service Announcement” kicks off with Zoey Johnson (Yara Shahidi) finishing her summer off strong at a shoot with clients Joey Badass and Indigo (Saweetie). After spending some time in the real world, Zoey is set on returning to Cal U to make sense of her (relationship?) with Aaron (Trevor Jackson). Unfortunately, upon her return, she learns Aaron’s got a whole new girlfriend — and, as a matter of fact, he isn’t the only Cal U student moving on with his life. Zoey’s ex, Luca (Luka Sabbat), is getting pretty serious with his new bae Jillian (Ryan Destiny); things are steamier than ever between Ana (Francia Raisa) and Javier (Henri Esteve); and, Jazz (Chloe Bailey) and Doug (Diggy Simmons) decide to officially call it quits. At the end of the premiere, Zoey and Jazz make an honest effort to leave the past in the past by muting Aaron and Doug on Instagram.

In our chat with Trevor Jackson, Jordan Buhat, Diggy Simmons, and Luka Sabbat, the fellas chime in with what they believe is proper social media breakup protocol. They also reveal which Grown-ish character they’d want to switch places with this season, if given the opportunity. The ladies — Chloe and Halle Bailey, Yara Shahidi, Francia Raisa, and Emily Arlook — chime in on the same topics, also sharing their thoughts on whether to mute, block, or unfollow your old bae when it’s said and done. See their hilarious responses in the accompanying clips.

Grown-ish airs every Thursday at 8 p.m. on Freeform. Be sure to tune in!

ALSO: Saweetie Talks Getting Into Character For Grown-ish & Working With Yara Shahidi