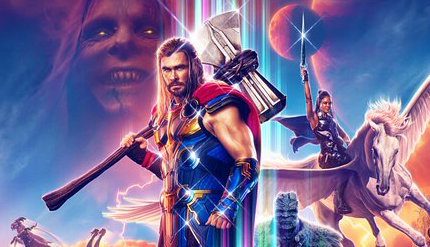 ‘Thor: Love And Thunder’ finds the strongest Avenger (Chris Hemsworth) on a journey unlike anything he’s ever faced: a quest for inner peace. But his retirement is interrupted by a galactic killer known as Gorr the God Butcher (Christian Bale) who seeks the extinction of the gods.

“To have this reaction and be seen as big, you realize, ‘Oh, this must be so different, to walk through the world like this,’” she continued. “When you’re small — and also, I think, because I started as a kid — a lot of times I feel young or little or, like, a pat-on-the-head kind of person. And I present myself that way, too, because of that.”

Together, they embark upon a harrowing cosmic adventure to uncover the mystery of the God Butcher’s vengeance and stop him before it’s too late.

Written and directed by Oscar-winner Taika Waititi (who also helmed ‘Thor: Ragnarok’), the fourth film of the epic series is jam-packed with hilarious shenanigans, classic Rock anthems, and heart that sets it apart from most MCU films.

There’s also enjoyable cameos by The Guardians of the Galaxy and Russell Crowe who steals the show as the hilariously debaucherous Zeus.

We caught up with the God of Thunder himself, Chris Hemsworth, who told us what fans should expect from Thor’s latest adventure, revealed the secret to a Thor summer body, shared his favorite Thor moment (so far), and more in our interview you can enjoy below: