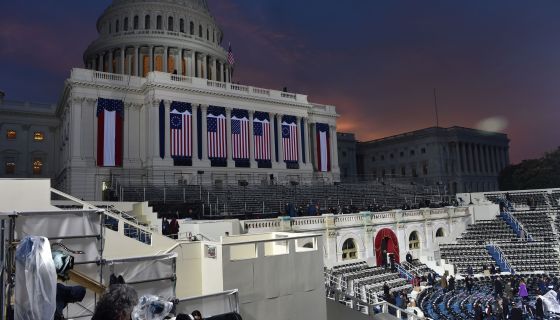 All of the buildings in the US Capitol Complex are now under severe lockdown following a security threat from Trump supporters forcing Congress to recess during the Electoral College vote certification.

Here’s the scary moment when protesters initially got into the building from the first floor and made their way outside Senate chamber. pic.twitter.com/CfVIBsgywK

President Trump targets voter recertification in a late bid to block President-elect Joe Biden. The entire Senate was rushed into the Capitol basement by uniformed police officers today amidst breach of security on the Hill. Senator Mitt Romney, a notorious critic of the president’s dealings, spoke with reporters as he was ushered along with the other lawmakers into a safer location.

“This is what the president has caused today, this insurrection,” Romney tells The New York Times.

In an effort to calm his supporters, President Trump posts on Twitter urging them to “stay peaceful” in his first statement after pro-Trump protesters stormed into the Capitol building in Washington, D.C. this afternoon.

Please support our Capitol Police and Law Enforcement. They are truly on the side of our Country. Stay peaceful!

These comments come far too late after Trump shows his support for this rally, which was promoted as a protest to stop his false claims of a stolen election.

Washington Mayor Muriel Browser has issued a citywide curfew starting at 6p.m. ahead of the raucous pro-Trump protestors have caused since their attempts to take over the Capitol building. No one is allowed to walk or drive in “any street, alley, park, or other public space” between 6 p.m. and 6 a.m., Ms. Bowser issued on Twitter.

Today, I'm ordering a citywide curfew for the District of Columbia from 6:00 p.m. on Wednesday, January 6, until 6:00 a.m. on Thursday, January 7. pic.twitter.com/lp6Pt3DcYC

Citizens express their outrage concerning the right-wingers violent protests today claiming that if these were Black Lives Matter protestors the story would have a different ending.

BLACK PEOPLE WOULD BE DEAD IN THE STREETS IF WE CARRIED ON LIKE THIS.

MAGA hoes running through the capitol like a tomb raider….and not one person got shot? pic.twitter.com/xmC9I61Kon

Looking back at protests in response to last year’s series of racially motivated murders and hate crimes, citizens can conclude that law enforcement’s response to peaceful protesting and that of which has occurred today are vastly different approaches. Guns were drawn today at the Capitol after Trump supporters had already broken glass and forced entry upon lawmakers.

Cops are taking selfies with the terrorists. pic.twitter.com/EjkQ83h1p2

Denver Police did this to my sister this summer while protesting with her hands up. I don’t wanna hear a damn thing about “law and order” while White supremacy play fisticuffs with police for the last 48 hours. https://t.co/AFpVgjEhoU pic.twitter.com/smygaVIkli

NEW: President Trump is in the private dining room off the Oval Office as Capitol protests grow https://t.co/LXUSDVxBPW pic.twitter.com/nV0jsNujcD

This madness is a result of negligent statements made by President Trump in regards to a “stolen” election, which is in an effort to prevent him from feeling the pain caused by miserably losing his second term of presidency.

The way they would have dropped a whole bomb on the capitol if this was us.

The bottom line is the script would be a polar opposite of America’s reality had Black or Brown protestors stormed into a federal building demanding change. It is painful to watch American citizens disregard the democracy that was bestowed upon the United States of America by the very people destroying it. This isn’t a time to place the blame, but to rightfully protect the lawmakers and people on the Hill who are working to ensure American citizens are protected and policies are put in place for the good of all people. Unfortunately, that’s simply not what these Trump supporters want to hear. We will standby for updates on what is being done to stop these attacks on the Capitol, and for the final count of results from Trump’s alleged “stolen” election.