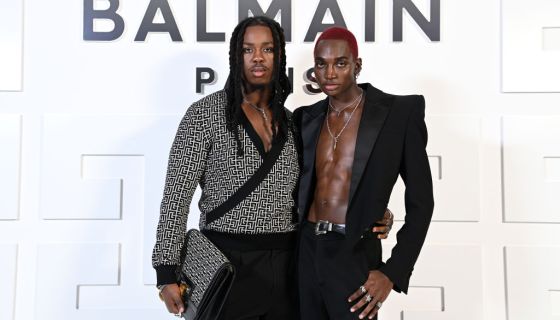 Popular YouTuber, actor and fashion enthusiast, Denzel Dion shared a strikingly similar side by side photo of him and his best friend, actor, comedian and Internet personality, Rickey Thompson, alongside rappers Gunna and Young Thug. The two unlikely duos are wearing the exact same outfits, and the inevitable question is: Who wore it better?

Dion and Thompson are posed on the cover of Pause Magazine’s February 2022 issue in eye-catching Gucci overcoats. These two opted for a wide legged pant and platform shoes. Meanwhile in Gunna and Young Thug’s photo, the pair wore their usual more fitted (read: tight) pants with sneakers and boots.

Dion posted the side by side comparison with the caption, “ikyfl.”

Fans are sharing their reaction of the astonishing similarities. Was this a mere coincidence or was this a complete ripoff and the YSL pair were completely inspired by the social media influencers’ fashion sense.

Thompson is an actor, comedian and popular Internet personality. He rose to prominence for comedic videos he posts to Instagram, and previously Vine. Thompson starred in the YouTube Red series Foursome. As for Dion, he’s a popular YouTuber, actor and fashion enthusiast, who is known for his scathing fashion critiques and commentary on celebrity pop culture. He’s famous of this tagline, “I said what I said, and I meant what I said.” The social media star has no problem sharing his opinions on everyone and everything, including Young Thug and Gunna’s obvious carbon copy outfit choices.

The two social media stars are best friends, who often share comedic videos together. The two shared the cover of this magazine in February and did so flawlessly. The photo of Gunna and Young Thug was shared thereafter. Check out the side by side photos. Comment who you think wore it better below.