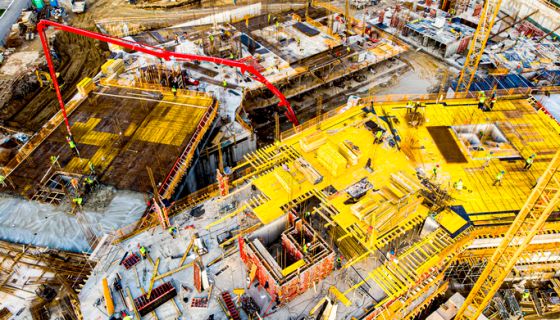 Marc Lore, the former president of Walmart e-commerce and co-founder of Jet.com and Diapers.com, is attempting to create the unthinkable – a Utopian city in the middle of the American desert.

The Billionaire is currently spearheading the conceptual and financial building blocks for Telosa, which was announced in September. Lore and his team are looking to build Telosa in the American West desert or Appalachia.

Lore’s idea is to create a place that is focused on societal inclusion over division, which is quite different from the current realities of American cities across the states. Lore has major plans for Telosa. The city would have equal access health care, an impressive education system, and safe environments for families regardless of income, race or gender. His mission is for Telosa to be a diverse place for various races, genders, sexual orientations, religions and political affiliations.

The new utopian city in America will cost over $400 billion and it is to be built in the desert if properly funded.

Lore’s mission statement for the city is to “create a more equitable and sustainable future” that can “become a blueprint of future generations.” That’s backed by a 150,000-acre design proposal with eco-friendly architecture, sustainable energy production, and a drought-resistant water system.

The city plans to have a population of around 5 million and the focus will be its state of the art transportation. Telosa would prioritize bikes and pedestrians, as well as slow-moving autonomous cars over fossil fuel-dependent vehicles elsewhere.

The official city of Telosa website speaks to their mission being influenced by the massive effects of climate change by the year 2050. The website cites that 1 billion people will be affected and that figure falls in line with a United Nations climate change report from August, which notes a “code red for humanity,” noting Earth could reach 1.5°C by 2040.

“We have a chance to prove a new model for society that offers people a higher quality of life and greater opportunity,” Lore said in a statement shared with USA Today. “When I look out 30 years from now, I imagine Equitism serving as a blueprint for other cities — and even the world — and Telosa being a place of pride for all who live there.”

Telosa is the future. Its’ name speaks for itself being derived from the Ancient Greek word telos, meaning “higher purpose.” Nearly everything appears to be fueled by solar power energy, autonomous electric cars, and high-speed transportation.

Lore has plans to start the first phase of 50,000 living residents in the city to be welcomed by 2030.

“I’m not pursuing this to make money,” said billionaire Lore, also co-owner of the NBA’s Minnesota Timberwolves. “I’m doing this because of what it can mean for others and the future. If this entire attempt doesn’t work, then hopefully, there are things to learn from itand it will inspire others to take their shot.”

If you are interested in becoming a resident of the expansive city, the selection process has not been confirmed but it will likely be done by application. One thing Lore promises is that inclusion of varying races, genders, sexual orientations and religions will be a top priority.

Lore’s lofty plans are met with a little pushback by spectators. One reason people may consider the burgeoning city will be a Lore-created venture capital fund that could house startups that relocate to Telosa.

“We can’t create a city without some early nudging to move to the city,” Lore said. “We’ll have to kick-start in an unconventional way, but the hope is we’ll position the people to grow a culture.”

Lore discusses that the infrastructure for building upon the first “settlers” will be sorted out with aid from his team of 50 volunteers and full-timers made up of architects, historians, researchers, economists, creatives, designers, engineers and climate experts.

Lore may have big hopes and dreams for this new Utopian city, but he would not be the first wealthy man to attempt such a large feat. Bill Gates announced in 2017 plans to build a smart city outside of Phoenix on 2,800 acres. Millionaire Jeffrey Berns also bought 67,000 acres in Nevada for a smart city.

Lore’s vision is different from his counterparts.

“I’m very open to others’ opinions and I want (Telosa) to be based on the collective thinking of people in the world,” Lore said.

Lore is moving forward on his plans to build Telosa from the ground up.

“I don’t have all the answers,” Lore said. “But each day I’m learning.”

Would you move to America’s first Utopian city?

Take A Hike Day: Visit 10 of the World’s Most Scenic Hiking Trails [List]

The Daily Grind Video CLOSE Source: AscentXmedia / Getty Grab your hiking boots, a light snack, and some water because today,