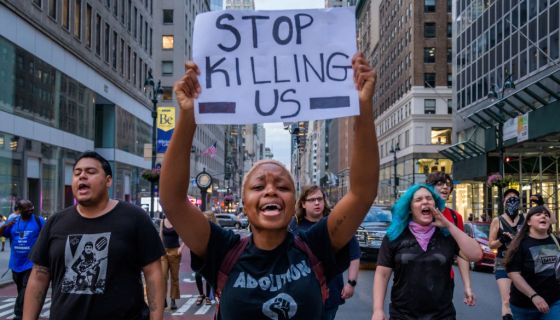 Justice For Justin King: White Man Claims He Killed His Black Neighbor In Self-Defense, But Their Neighbors Say He’s Lying

A Black-Filipino father was shot in a trailer park by his white neighbor who is claiming self-defense. But their neighbors, who knew them and witnessed the dispute, say the story that was told to police isn’t true.

On the morning of November 3, 28-year-old Justin King was shot and killed in a small town called Bourbon, located outside of St. Louis. According to police, King was attempting to break into his 42-year-old neighbor’s house when he was shot, but witnesses say he was in fact killed in “cold blood” by his neighbor after they spent a lot of the day together.

“The Crawford County Sheriff’s Department said King was shot ‘after forcing entry into a neighboring residence where an altercation took place.’ The homeowner ‘feared for his life’ and shot King, the department said in a news release. The department said evidence, video surveillance and statements ‘preliminarily corroborate the homeowner’s account of the events.’ But family members of King and five people who live in the trailer park told NBC News they doubt that narrative. Three neighbors told NBC News the shooter was a man who had expressed a desire to kill someone, has a history of violence and was known to use racial epithets. Several neighbors said King and the shooter were friends.”

John King, the victim’s father, told NBC: “The only person that says it’s a home invasion is the guy that shot my son. And all the neighbors are saying, ‘No, you shot him in cold blood outside.’” “He had no shirt on, only pajama bottoms. So how was he a threat?” King continued. “Justin was shot in cold blood outside in broad daylight.”

One neighbor who witnessed the incident recalled Justin King saying “I thought we were friends” to the shooter after being shot, to which the man allegedly replied “We were!” before walking away.

“Another neighbor, Katie Bosek, described King as ‘a gentle man who helped everybody.’ She said he helped her search for her dogs that went missing the same day as the shooting. Later that day, King and the neighbor who shot him worked together to fix her car, she said. ‘They both got under the hood together. They’re just cutting it up laughing as they’re doing it,’ she said. She claimed she saw King and the neighbor walk off together. She said she heard three gunshots about 15 minutes later and rushed to the window to see King lying on the ground.”

The President of the Missouri NAACP, Nimrod Chapel Jr., is representing the King family. We will continue to keep you updated and please keep Justin King’s loved ones in your prayers. May he rest in peace.